Ryan Biggs | Clark Davis performed structural observations of the parapet of the Adirondack Trust Company building. The 30,000-square-foot bank building was built in 1901 and is comprised of Vermont white marble with decorative engravings and sculptures adorning the main entry.

The purpose of the observations was to determine the extent of the deterioration within the large marble panels that make up the parapet and determine the cause of reported displacement.

Measurements of existing conditions of the parapets were taken, and each stone panel was reviewed and evaluated to determine if the marble could be restored or required replacement. The observations of the exterior surfaces of the marble panels and decorative sculpture elements included the use of a Ferroscanner to determine if metal anchors or embedments were used to anchor the marble. Mortar samples were also taken to analyze the binder and aggregates and develop an appropriate mortar for repointing. 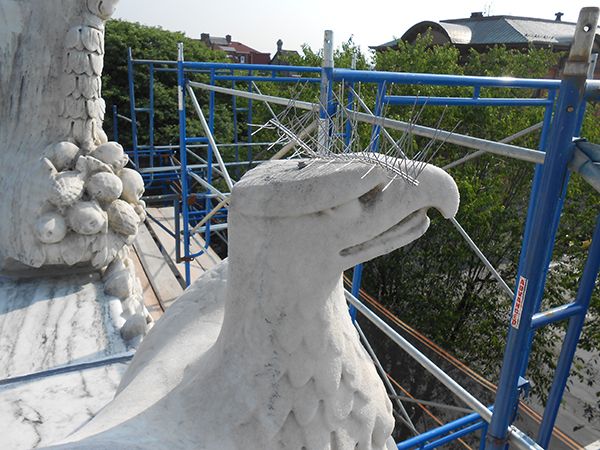 Once all deterioration and movement of the marble panels was identified and mapped, Ryan Biggs | Clark Davis provided the design for the recommended removal and re-anchorage of the existing marble. Heavily damaged panels were replaced in kind.

The decorative marble crest and eagle sculptures above the main entry were documented further using 3-D laser scanning technology to accurately record the existing conditions. Crack injection techniques were used to restore the sculptures in place.

To commemorate the 100th anniversary of the construction of the Adirondack Trust Company Headquarters Building, Ryan Biggs | Clark Davis was retained by the bank to locate a 12x12-inch copper box that had been placed in the building's cornerstone in 1916.

Ryan Biggs | Clark Davis employed the use of the StructureScan Mini from our arsenal of nondestructive testing equipment to locate the copper box.  The Surface Penetrating Radar (SPR) device transmits electromagnetic energy (in the form of RADAR waves) into the building material through an antenna.  The system can detect the depth and location of objects embedded to a depth of 1 1/2 feet below the surface.

The 100-year old time capsule contained a list of the nine employees (all clearly legible), a list of the board of directors, currency, a charter of the Village of Saratoga Springs from the 1800s, brochures of the now Congress Park, and copies of The Saratogian newspaper depicting news stories about World War I.  The capsule also included a letter to the future from founder and first Bank President, New York Senator Edgar Brackett.  In the letter he encourages all to have "respect for the law, respect for the community, and respect for the people who work for the bank."

Following the reveal of the time capsule, items from modern day Saratoga Springs were placed in the capsule to be opened in another 100 years.  These items included a Saratoga Springs Visitor's Guide, Saratoga National Historic Coins, copies of The Saratogian newspaper, and a digitally printed copy of the remarks made at the ceremony.