The structural design of stair systems must consider the effects of uniform and concentrated loads on the various components.

The structural design of stair systems must consider the effects of uniform and concentrated loads on the various components. Most building codes (i.e., 2015 IBC, Chapter 16 – Structural Design, Table 1607.1) have traditionally specified a uniform load of 100 pounds per square foot (psf) and a concentrated load of 300 pounds applied anywhere on the stair system. In general, concentrated forces control the design of treads and other horizontal components subject to direct foot traffic, while uniform loads control the design of stringers, and other structural framing that support treads and landings.

The Structural Engineer of Record (SEOR) rarely designs typical stair systems. Instead, the Architect will prepare a specification (usually Specification Section 055000 “Metal Fabrications”) that stipulates minimum performance criteria to be used for the delegated design of these types of stairs. The specification, along with architectural details found in the drawings, is generally sufficient to allow for the proper design and detailing of stairs. The 100 psf uniform and 300-pound concentrated load criteria have traditionally provided safe and serviceable designs for stairs.

OSHA Section 1910.25 specifies its own criterion regarding Walking-Working Surfaces and Stairs, (including standard, spiral, ship, and alternating tread-type stairs). Part 1910.25(b)(6) states the following:

“Each stair can support at least five times the normal anticipated live load, but never less than a concentrated load of 1,000 pounds (454 kg) applied at any point.”

The 1,000-pound point load is meant to account for a 300-pound person potentially running down the stairs. The impact of their footfall in that scenario will be higher than if they were simply standing on a tread. OSHA further clarifies the criterion by providing an interpretation for this loading with the following response:

“The design of fixed stairways and their components must be based on their ultimate strength [yield stress (FY) or ultimate stress (FU)] and not on the allowable stresses as given in the Allowable Stress Design method of the American Institute of Steel Construction, Ninth Edition.”

Based on this response, the original design loads of 100 psf uniform and 300 pounds concentrated are based on allowable stress design, while the higher concentrated load noted in 1910.25 is based on ultimate strength design. Regardless of which design methodology is used, the OSHA criterion for concentrated load on a stair tread or landing pan will control the design of those components, whereas the 100 psf uniform live load will govern the design of the stringers and other structural supports like landing beams and flight headers.

For Architects, it is important to ensure that the OSHA criterion is also referenced in the performance requirements for stair design in the project specifications. Typical stairs that have solid tread and riser assemblies will generally be adequate to resist the 1,000-pound ultimate concentrated load since the risers stiffen the front and back of each tread.

However, for stairs that have unusual tread and riser, or landing configurations (or have no risers), the OSHA requirement may overstress these components. Some proprietary stair tread and landing components may not meet this requirement either.

The SEOR should review these items with the Architect during the Design Phase and make sure that the appropriate design effort is included in the SEOR’s scope. Unusual or feature stair configurations should not generally be left to a delegate engineer. For some projects, the stairs are the most complicated portion of the structure. Beyond checking the stress in stair components, the SEOR should also be aware of finishes used on stairs, particularly treads, which may be susceptible to cracking from excessive deflection. An example is stone or tile treads anchored to metal pan treads or glass panel railings.

Good communication between the Architect and SEOR along with awareness of these design criteria will help ensure a successful outcome for your project. 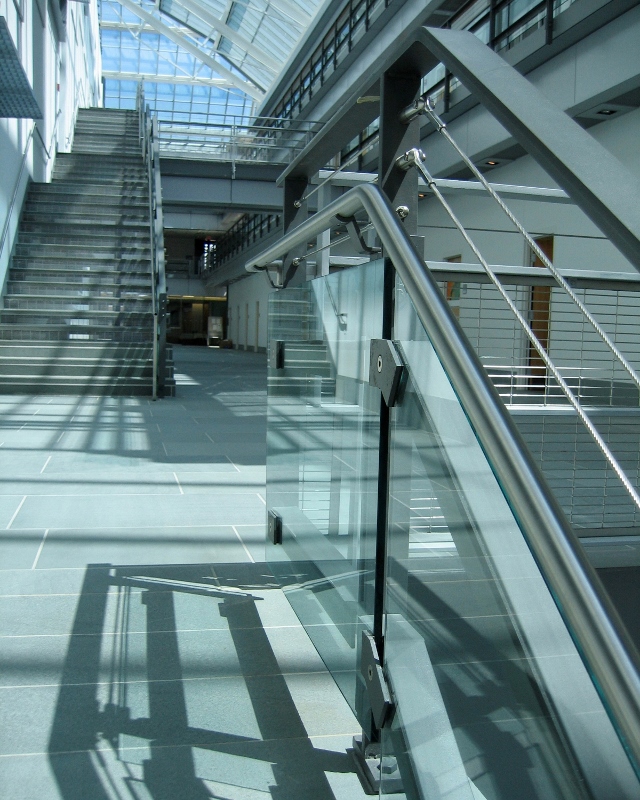